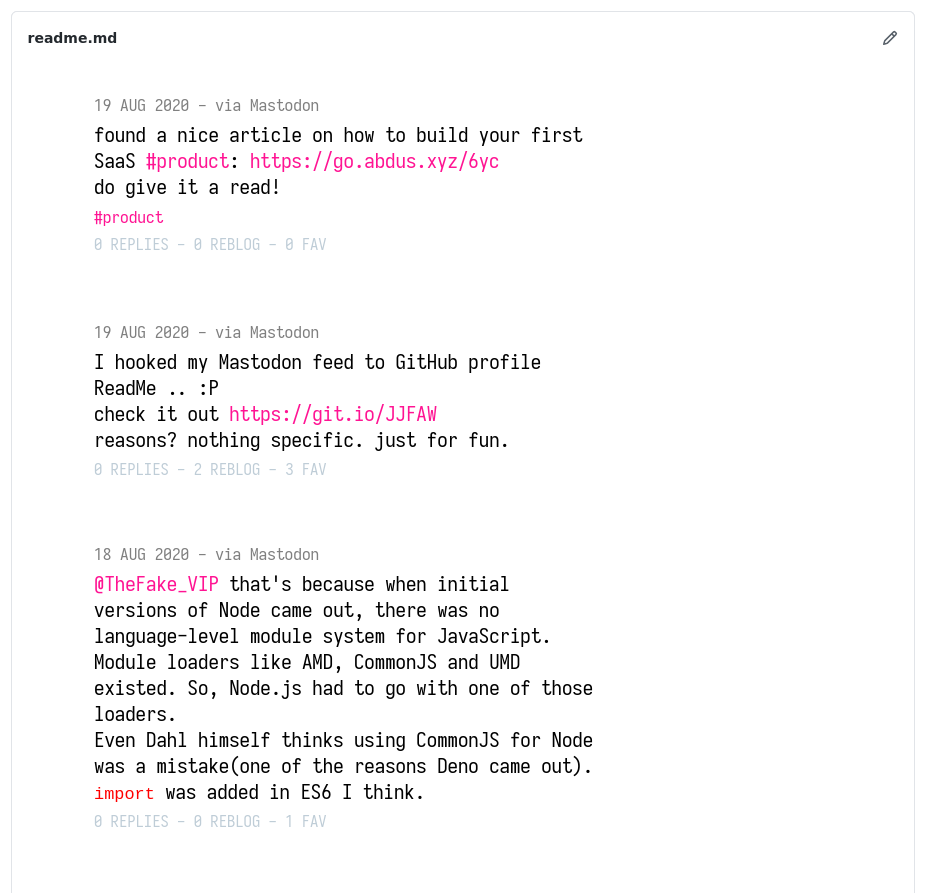 I had this weird idea of using GitHub profile README as Twitter-like(well, Mastodon TBH) feed! There was no specific reason for doing so. I thought it would boost my Mastodon profile(which is quite new at the moment) reach.

Another reason was to see how far I could go with limited tools (as Github ReadMe does not support JavaScript yet).

There was only one thing to figure out. How to create beautiful status cards with limited CSS! I knew I could use SVG and make whatever I want. But not all browser supports every feature of SVG yet. So, generating and storing SVG codes as images may not always work.

Since GitHub has introduced workflows(better be late than never), I chose to render SVG on a webpage and convert them to PNG, all in Server-side.

This way, I am assured that SVG would be rendered in the latest browser and converted PNG. But how do I do it?

There is a package called Puppeteer in the NPM registry. This library gives the user a way to control Chromium/Firefox browser programmatically. This, by default, runs browser in headless mode. So, the user would be able to run it without a Desktop Environment.

Getting ‘Toots’ from Mastodon

Mastodon have an API to fetch public toots of any profile without using an API key. The response is in JSON, so parsing it was quite simple.

Biggest surprise: If I add a Middot (·) somewhere inside SVG, loading image won’t work! It throws an encoding error.

After pushing the initial version to GitHub, I noticed that the font I was using locally was not available in Github Workflows environment. So, I had to install them manually. Although I could simply add a font CDN using style tag within SVG, why not do it the Linux' way? :P

I set-up the workflow to run in two events. First is, when I push something to the repository. And second is, on every hour (using a Cronjob). This way, I won’t have to worry about updating ReadMe manually when I post a new toot.

And the work is done here!

Sure, this thing was just for fun. But I learnt quite a few new things.

If you liked this, I would be happy if you star 🌟 this repository. You can follow me on Mastodon. My handle is @abdus@linuxrocks.online.